moose, the noun and the verb

east side of the road against the line of the dense forest, dusk.  this is precisely what it is to stare into the face of a moose.  precisely.  i could show you the ordinary face of the moose, the one he wears, the one we are familiar with, the one we expect, except as i stared into his true face only some feet away i was unable to think toward my hands and adjust my camera. 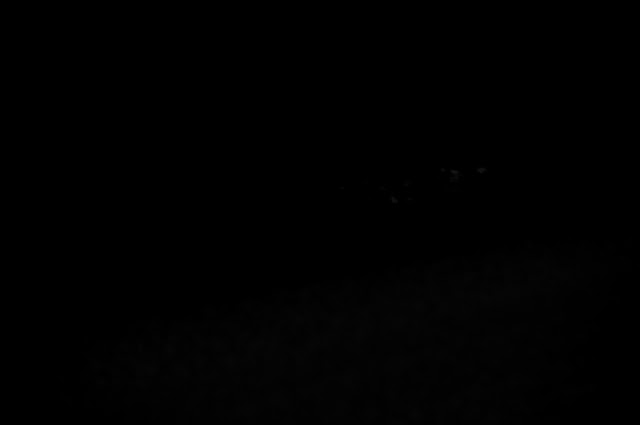 moose, east side of the road, killarney, ontario

earlier in the day i stopped to touch the remarkable head of a dandelion.  i ate fresh strawberries picked by my own hand, strawberries! with specific strawberry flavor.  and earlier than that during a run i paused and ate a pink head of clover.  five days before i stopped during my run and touched the flower of a lupin, a flower i have loved but never once touched before.  each petal unit was like a bell or a pocket, its keel covered by two wings creating its unique shape.   all these years i had no idea.  as i drove toward the forest i touched my arms and my neck, my nose, as i do, becoming reacquainted over and over again with this body that houses me. earlier in the morning i discussed with james through a post of ruth's the heated nature of how language is both a bridge toward and a bridge away from true understanding.  and then the day. and then this moose.

if you could take earth that has never been seen before and stitch it into a cloak and throw it around the shoulders of an ancient idea, this is what i want to tell you the moose's colour was.  the ancient idea would be breath, first breath, a handful of breath lung sized thrown into the house of a body, the breath before human, the one before language was born.  the moose breathed, it snorted, distinct in its body, as distinct as the dandelion and the strawberry, as the clover and the lupin, but with awesome and terrible animation, the moose was.

we stared at one another with only the distance of a few dark feet between us.  at first the moose was stock-still willing me blind.  i was careful to not take my eyes off it.  i put down my car window and slowly raised my camera.  some time passed in the world with both of us breathing.  when it realized i was not being lured into its trick of blindness it willed me away with its strength.  it tossed its head and snorted.  did it stomp its feet?  it raised its left front leg and scraped it against its right front leg.  didn't i understand what it was capable of?  yet still i did not go.  it was still again and we stared at one another.  again there was only time between us, time and the distance in me of being human.  i think we both knew there were moments of decision.  it might have charged me.  (what might i have done in its mind?) but i could not help myself except to remain and be who i am, deeply curious, entranced with possibility.  i was staring into the face of our history, well past the obstacles of being human, except for my being human, of course.  inside the moose is the information we need to understand ourselves.  we too exist in a place beyond language but sadly we have no ability to be aware in that place.  our language keeps undoing our experience of it.  (although this is paradoxically our happy situation, as well, our ability to utter and communicate.)

the moose began to move its awesome body toward me.  i was not going to move.  whatever was to happen would happen.  and then it suddenly veered off away from me onto the road. 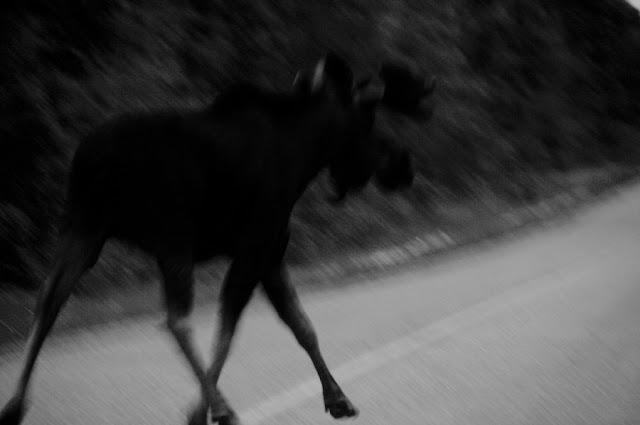 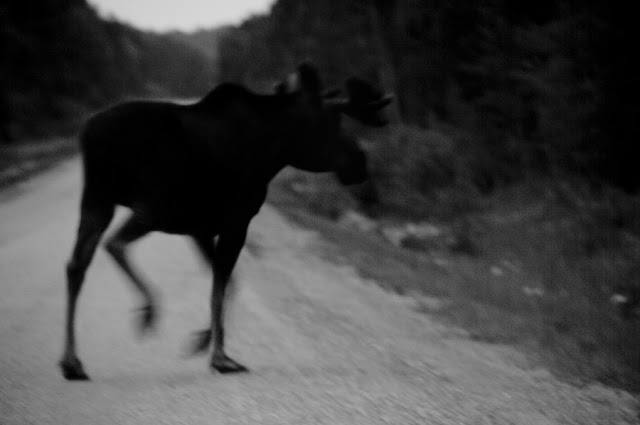 he entered the forest on the east side but did not flee into it.  he was not afraid.  he kept his strong rump toward me and immediately munched foliage, as though consuming were a part of his horrible being, something i should be frightened of.  (yes, moose, i am wary and sometimes weary of consumption.)

i sit here now typing this, thinking of the moose i saw, conjuring up the memory of his dark face.  although i know the location of the encounter, although i understand i met him on a road through the forest in killarney, i feel his face present inside me, as though it lurks in the meated tissue located in the back part of my skull behind my brain. 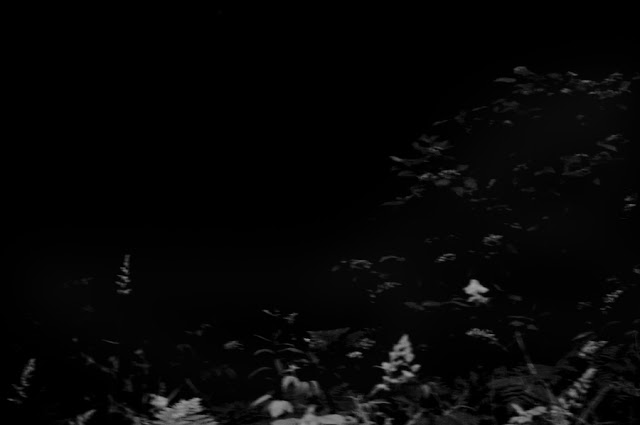 moose, west side of the road, killarney, ontario
Posted by erin at 10:24 AM